Drunk immigration lawyer who drove his car towards oncoming traffic and smashed into a telegraph pole and nine parked vehicles is fined £10,000 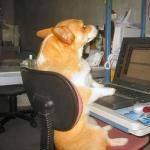